Do you know that song, Baby shark dut do, dut dut....??? It's a cute song and even cuter now that Nolan is attempting to sing it with me. Maybe by Halloween we'll have it down.
Lissy wanted to be a shark attack victim for Halloween this year, she settled on a "Soul Surfer" version. I found a really cute Goofy custom at a consignment shop for Nolan, only the head is too high and heavy for him and he HATES it. I wasn't going to buy another costume for him. While thinking of what he could be I decided a shark to go with his sister's costume would be perfect. So here's how I made a shark costume: 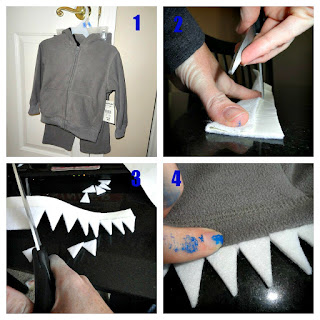 1. Start with a gray hoodie sweatsuit. How easy is that? I found this one at Walmart of course.
2. Using sticky back white felt fold along the longer length about an inch long. Don't remove the backing yet. Score the backing along the edge. Now remove the backing of the folded section and squish together. Doubling the felt makes the teeth stiffer and stick off the hoodie better.
3. Cut triangle shapes to make teeth.
4. Now remove the final backing and stick to the inside of the hoodie so that the teeth are lined up along the edge. I was able to cut 2 pieces to fit around the entire hoodie, probably depends on the size of the sweatsuit.

5. Cut 2 strips of 1 inch wide red felt. Using fabric tack apply the red strips to the inside of the hoodie over the white felt but not covering the teeth.
6. Find something circular and trace onto black felt then cut out to make eyes. I used an apple corer, but I think a Quarter would work well too. I was going for a beady eye for this shark.
7. Using fabric tack again to adhere the eyes.

8. Fold a piece of gray felt in half then draw a dorsal fin onto the felt. I tried to add a slight curve to one side of the fin and a rounded top. Cut out fin.
9. Using fabric tack glue around fin    Sew around the fin pieces leaving the bottom open. Fabric tack didn't seem secure enough for me. Turn the fin right-side out and stuff with fiber-fill.
10. Sit stuffed fin on remaining gray felt and trace around it- mine looked like an elongated tear drop shape. Cut that shape out then using a needle and thread make a blanket stitch around to close up the fin. Finally, add velcro tape to the back of the sweatshirt and the fin.

It really was very easy to make. I wanted his costume to travel and didn't think a fin on the back would feel good squished into a car seat, that's why I made it removable with the velcro. I think after Halloween I could probably remove the teeth and velcro and he could wear the sweatsuit still-Bonus!
Do you think my baby shark is gonna get lots of candy this year? 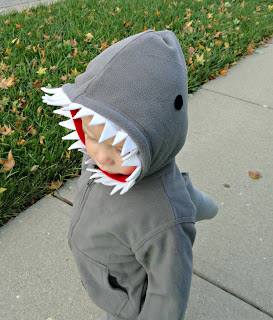 Did you know shark can run? 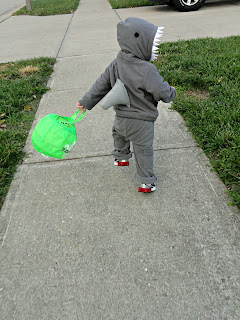 One last one-because he is so stinkin' cute!!! 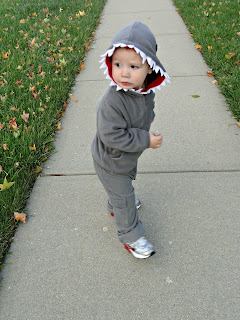 Now to make a Soul Surfer costume fit for my Lissy. How do you make a beach like outfit appropriate for a cool (probably cold) Indiana Halloween?
Did you make a costume last year? I'd love to see what you've made. You are welcome to email it to me or share it on my Facebook page.

Thanks for visiting At Home with Sweet T!
-Tracy

Linking up to these fabulous parties:

About At Home with Sweet T

Tracy Snyder
Indiana, United States
Welcome to my blog. Here you'll find a wide variety of projects meant to inspire you. Enjoy! and share back with me what you create!